30 Years Later, Goodfellas remains at the apex of gangster films

At the forefront of its genre, Goodfellas challenged The Godfather as the greatest gangster movie ever made, and is among Martin Scorsese’s finest works. On the 30th anniverary of its release, Brett Dworski looks behind the scenes to explore the legacy of a true Hollywood classic.

Martin Scorsese probably didn’t know that the book he casually bought in 1986 would eternally change his legacy and the gangster genre.

While directing The Color of Money that year, the acclaimed filmmaker read the non-fiction crime book, Wiseguy: Life in a Mafia Family, by Nicholas Pileggi. Scorsese loved the book so much that, after finishing it, he cold-called Pileggi with an offer he couldn’t refuse.

September 19 marks the 30th anniversary of Goodfellas, Scorsese’s adaptation of the rise and fall of New York mobster Henry Hill. The film occurs over the course of 25 years—from 1955 to 1980—and depicts Hill’s early admiration for the local mafia and his subsequent rise within it.

Thirty years after its release, Goodfellas remains at the apex of gangster films—and it all begins with Scorsese’s sharp, explosive directing. Having grown up in New York’s Little Italy surrounded by the greasy-haired, pricy-suit-wearing thugs roaming the streets, Scorsese wanted to depict their day-to-day lives in his mobster epic. This meant displaying how they dressed, the clubs they hit, the foods they ate, the homes they lived in, and even the jokes they told. Scorsese’s empathetic and sensible depiction of these real-life gangsters became the foundation for Goodfellas soaring into the Hollywood stratosphere.

But Scorsese’s vigorous direction couldn’t have survived alone—he needed the talent in front of the camera. Robert De Niro shines as Jimmy Conway, the brash and intelligent thief who takes Henry under his wing. Known for his intense method acting, De Niro frequently consulted with Pileggi when prepping for the role of Conway, who was based on real-life gangster, Jimmy ‘The Gent’ Burke. De Niro also called Henry Hill several times a day to discuss how he could replicate Burke’s mannerisms onto the screen – down to the finest details, like how Jimmy held a bottle of ketchup.

Henry is played by Ray Liotta, who—through his boyish charm, handsome looks, warm demeanor and anxious tendencies—believably portrays the man’s rise and fall from the ranks of the mob. Liotta had only been in four feature films prior to Goodfellas, and the studio had even planned for a more established actor to play Henry. Once Liotta got the role, he would listen to Henry Hill’s real FBI cassette tapes to practice speaking like the mobster.

Lorraine Bracco radiates as Karen Hill, Henry’s peculiar and loving wife, as she spirals alongside her husband into a harrowing world of fear, drugs and violence. Joe Pesci’s role may be the most iconic, as his take on the menacing Tommy DeVito won him an Oscar for Best Supporting Actor. Pesci steals one of the more memorable scenes in Goodfellas when he gets defensive over Henry calling him “a funny guy.” Turns out, this was a real-life experience for Pesci, who once told a neighborhood mobster that he was funny. Apparently, the guy didn’t take it too well.

Three decades after its release, Goodfellas has been dubbed a cinematic jewel for its direction and performances. But what about its legacy and influence?

At the time of its release, Goodfellas used the word “f*ck” more than any other film in history. Today, it ranks No. 16 on that list, while The Wolf of Wall Street (2013) and Casino (1995)—other verbally foul Scorsese films—rank No. 3 and No. 7, respectively. Goodfellas set the bar for excessive swearing in movies, influencing the likes of directors such as Quentin Tarantino, the Coen Brothers and Oliver Stone to expand on it.

Goodfellas also laid the groundwork for HBOs classic TV show The Sopranos. Creator David Chase said in the voiceover commentary on the first season’s DVD that he admired how Goodfellas combined humor and violence, as well as how the movie explored the lives of its mobsters. He also referred to Goodfellas as “my Koran.” Case in point: Tony Soprano is a mob boss who sees a therapist to help with his professional and personal problems. Through its 86 episodes, The Sopranos cast 27 actors who appeared in Goodfellas.

“I always think about Goodfellas when they go to their mother’s house that night when they’re eating, you know when she brings out her painting, that stuff is great,” Chase said. “I mean, The Sopranos learned a lot from that.”

Goodfellas’ influence even stems to the camera. The famous one-shot scene where Henry and Karen enter the Copacabana—an innovation of the Steadicam—is one of the most iconic shots in cinema history. Although the Steadicam had been used since the mid-1970s, Scorsese was one of the first to use it during a long, unbroken sequence. Similar one-shot Steadicam takes have since been used and taken to the extreme in films such as Swingers (1995), Birdman (2014) and 1917 (2019).

Musically, Goodfellas also raised the bar. For its soundtrack, Scorsese chose songs that he felt addressed the scene or the characters, and he only used music that was either contemporary to or older than said scene’s setting. In 1955, when a young Henry stares out his bedroom window enamored with the local gangsters, he does so to the tune of Tony Bennet’s 1953 hit, Rags to Riches. When Henry and Karen marry in the mid-60s, they dance to The Harptones’ 1955 single, Life is But a Dream. When we follow Henry on his edgy cocaine journey, Harry Nilsson’s 1971 hit Jump into the Fire kicks into overdrive. Four years after Goodfellas, Robert Zemeckis used a similar tactic in Forrest Gump, as every song in the film appears in chronological order and during the era it was made, beginning with Elvis Presley’s Hound Dog (1956) and ending with Fleetwood Mac’s 1976 hit, Go Your Own Way.

While The Godfather (1972) captured the intricacies of the mafia—the business side, the deception within crews and familial rivalries—Goodfellas explored the mobsters themselves. It wasn’t as much about the mob as it was about those within it, showing us everything from their clothes, their cars, their money, their drugs and anything else that made them human. Beyond that, Goodfellas flipped the gangster genre by being witty, brutally violent and intuitive all at once. It’s a Scorsese masterpiece—and arguably the film that usurped The Godfather as the greatest gangster film of all time. 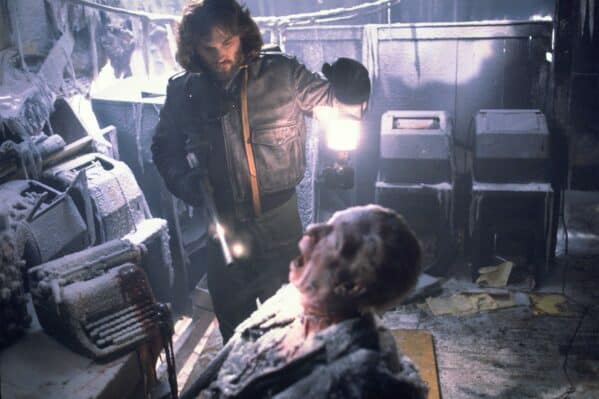