5 reasons why Jaws is still the ultimate shark movie

It was the highest-grossing movie of all time on its release in 1975 and since then, if anything, Jaws has grown in stature. Layla Cummins looks at why no other shark or Jaws movie has came close.

If you loved Jaws growing up you’re probably a shark enthusiast who has dined out on the many copycat films. Films like The Reef (2010) or Open Water (2003) where real-life ocean tragedies are repurposed and given the Hollywood treatment. Or schlocky b-movies featuring robotic sharks, prehistoric sharks, multi-headed sharks and even ghost sharks thirsting for revenge. There truly is a shark film out there for everyone, but the undisputed king of the ocean will forever and always be Steven Spielberg’s 1975 blockbuster sensation Jaws. Here are five indisputable reasons why.

1. There was just the right amount of shark

Few films today manage to get the balance between us seeing the monster and having to use our imaginations. Jaws gave us just enough shark to really appreciate it. Thanks to some wacky production anecdotes, we know the original plan was to include a lot more shark. However, because of frequent technical difficulties, the team had to make alternative plans. Admittedly, by today’s standards the animatronic star of the film does look a bit dated. But, even with limited screen time, he still manages to terrify his audience. Low-budget creature features today rely heavily on CGI and people’s fear of swarms (see Piranha Sharks, 2014). They very much tread the line between tongue-in-cheek humour and outright nonsense. While The Reef and Open Water used genuine shark footage as opposed to mechanical imagery, it doesn’t always have the same visceral effect as seeing the protagonists physically deal with the creatures.

The terrifying, shark-free opening to Jaws

2. Jaws is a straight-up A-Z thriller

The production company wanted a no-nonsense thriller movie right from the start and as a result, Jaws never drifts into dull or irrelevant side stories. Subplots from the novel like Mayor Vaughan’s connections to the mafia and Hooper’s relationship with Ellen Brody were cast aside to make way for the main storyline which, when you think about it, was an excellent decision. Modern shark movies often shoehorn unnecessary romantic subplots into their already busy narratives; think Taylor and Sunyin in The Meg (2018). At its heart Jaws was a story about man vs nature and isn’t that all anybody really wants from a decent shark movie? 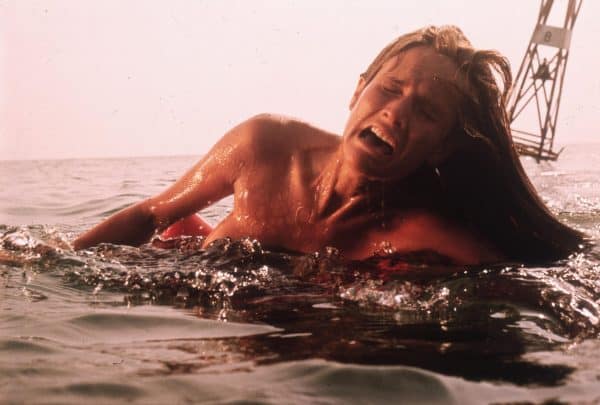 What makes Amity Island so memorable is the people who live there. Every crowded scene features people talking over each other and is believably chaotic, from the town hall meeting over the fate of the beaches to the gaggle of fishermen jostling for space around an innocent tiger shark. Throw in the wry one-liners and the bureaucracy and corruption of the mayor’s office and Jaws remains relevant in any decade. Watch any of the Sharknado films (2013 onwards) and the characters are one-dimensional and speak to each other in clunky dialogue chock full of exposition, cliched one-liners or flat, unsexy flirting. That’s not necessarily a bad thing; Sharknado has its fans and a successful franchise, but realistic it ain’t.

The town hall scene in Jaws

4. It’s so good, everyone steals from it

Deep Blue Sea (1999) borrowed heavily from its older cousin. Resident shark whisperer Carter pulls a Louisiana license plate out of one of his charges’ mouths; Hooper also pulls out a Louisiana license plate from the stomach of a dead tiger shark (the numbers even match). In Jaws Spielberg kills off little Alex Kintner within the first half-hour to show he meant business. Samuel L. Jackson’s death as he ill-advisedly stands next to the tide pool serves a similar purpose because killing off such a big name in the middle of the film shows they weren’t messing around. In fact, Jaws made such an impression on some filmmakers that they didn’t even bother hiding their sameness. Like the little-known Great White (1982) which unashamedly follows the plot points of Jaws like a numbered dot-to-dot.

5. It was a miracle it got made at all

Jaws went massively over-budget and over schedule. Complications due to filming on the ocean led to long days with little usable footage. The boat sank. The shark sank. Even the equipment sank. Cast and crew had regular meltdowns. Everything that could go wrong did. While there are not many fans who don’t already know about the film and its production woes, listen to any of the anecdotes from the production team and it’s easy to see that it was a collaborative effort. The very fact that it changed the game back in the 70s made it the iconic masterpiece it is today. It’s the combination of filmmaking lore and an excellent end product that means it will be a long, long time before something comes along to blow Jaws out of the water.

So, there you have it. It’s hard to imagine living and breathing in a parallel universe where the word Jaws isn’t synonymous with the greatest shark movie ever made. Without Spielberg’s tenacity, a wily production team and a dedicated supporting cast of islanders, actors, stunt men and women, plus a boatload of good fortune, Jaws might have been a very different movie indeed.