Scene and not heard: Raiders Of The Lost Ark

Nick Bartlett is back to analyse and acclaim another unsung scene from a classic movie. This time, it’s Spielberg’s action-adventure masterpiece, Raiders Of The Lost Ark.

When it comes to Indiana Jones films, Raiders Of The Lost Ark simply towers over the others in the series. It’s the quintessential action adventure film, and it’s much more mature than the sequels, with faultless set-pieces, brilliant cinematography and multi-layered characters. (Denholm Elliott’s Brody is far more lived-in and interesting in his brief appearance here than his comic turn in The Last Crusade)

When you think of the film, chances are the first scene that pops into your head is that classic introduction, with the rolling boulder, or the epic convoy chase, or even the face melting finale. What probably isn’t quite as obvious on first, second or even third viewing, is the story structure, and the shot composition, both of which show a master at work.

The scene I’ve picked is still an action set-piece, but one that is crucial to the story in a way I only picked up on during a recent viewing. It begins in Marion Ravenwood’s bar following Indy’s hamfisted attempt to obtain the crucial medallion – the key to the location of the Ark. However, no sooner has he left than the Nazis arrive, who take a much more direct approach in acquiring the medallion. On the surface this is a fairly simple action sequence, but it’s a great combination of all the elements that make the film the classic that it is.

The fight sequence in Marion’s bar

The scene begins with Marion (Karen Allen) looking wistfully at the medallion – which, thanks to Spielberg’s blocking, we never lose track of throughout the upcoming action. It’s a decent amount of time to spend on this one shot, but it’s necessary; the calm before the storm, and it’s a beautiful shot, with just Marion’s face and the candle taking up the frame. Douglas Slocombe, the director of photography, also shot films like Dead Of Night (1945), The Lavender Hill Mob (1951) and The Servant (1963), and clearly treated this silly action film the same way he would a serious arthouse film. Unlike say, a Bond film, Raiders is very carefully storyboarded, full of beautiful visual flourishes, and this sequence is no exception.

This is followed by one of my favourite shots in the film; the wide shot of Marion as the door opens. She’s a diminutive figure here, but resolutely stands her ground as the Nazis enter. The villains in Raiders are the best in the series by a country mile, with the charismatic Belloq (Paul Freeman), the rigid Dietrich (Wolf Kahler) and the unsettling Toht (Ronald Lacey) much more interesting than the fanatics and opportunists in the sequels. When I was younger Toht was always my favourite. Cast for his resemblance to Peter Lorre, who specialised in playing slimy, obsequious characters, Lacey perfectly encapsulates the idea of, “the banality of evil”, a weak, mild-mannered man (notice how he coughs when Marion blows smoke in his face) who nonetheless casts an imposing shadow, one that dwarfs Marion as he and his henchmen close in. His introduction is a great moment, his face cast in shadow, with only the glinting spectacles and disarming smile visible at first. 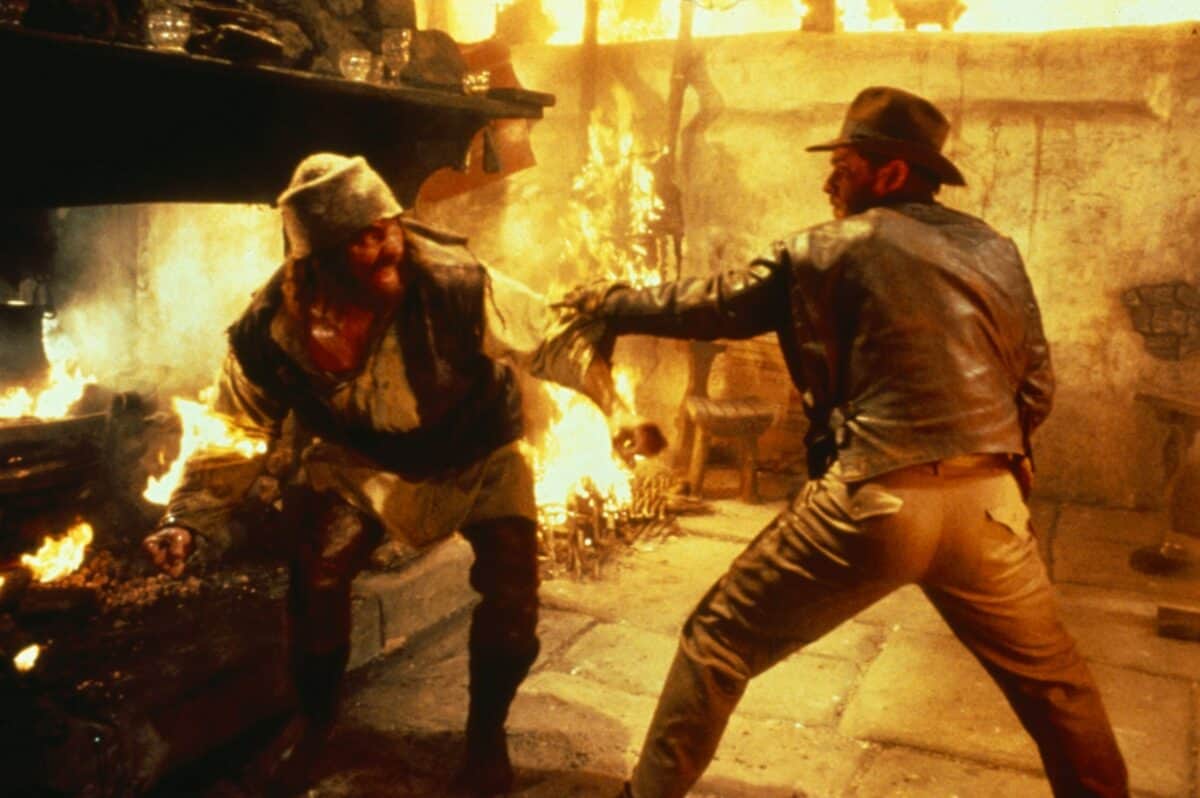 Indy deals with a bad guy

After a cursory introduction (during which Marion tries to draw Toht’s attention away from the table with the medallion on – something I only picked up on this rewatch) Toht threatens Marion with a red hot poker, only to be foiled almost immediately by the timely reappearance of Jones. Before he shows though, we get a bird’s eye shot of the bar, showing where all the baddies are – itself a perfect demonstration of Spielberg’s blocking. The rafters neatly frame the action as the camera pans around the room; we see Marion being grabbed at the top of the frame as Toht picks up the poker at the bottom. The geography of the scene is always crystal clear – there are 4 villains menacing Marion, plus one who bursts through the back door, and all are dealt with in a coherent, easy to follow manner.

In the midst of this apparent chaos, Toht takes refuge behind the table with the medallion on it. However, when he reaches for it, the now searing hot metal burns into his hand, leading him to run away screaming.

This leads to a story element that passed me by for over 20 years. Something that is never explicitly addressed in the film is how the Nazis know where to dig for the ark in the first place. Sallah and Indy talk about this in the “They’re digging in the wrong place!” scene, but that they are even in the right ballpark is down to this scene. When Toht grabs the white hot medallion, it sears the engraving into the palm of his hand. This is how the Nazis know where to dig in the first place. The only reason they are digging in the wrong place is because the medallion is two sided, and Toht only has one side burned into his hand. We see his mangled hand later, but nobody ever mentions outright that this is how they knew where to dig. It’s surprisingly subtle for an action film, relying on the audience to pick it up. 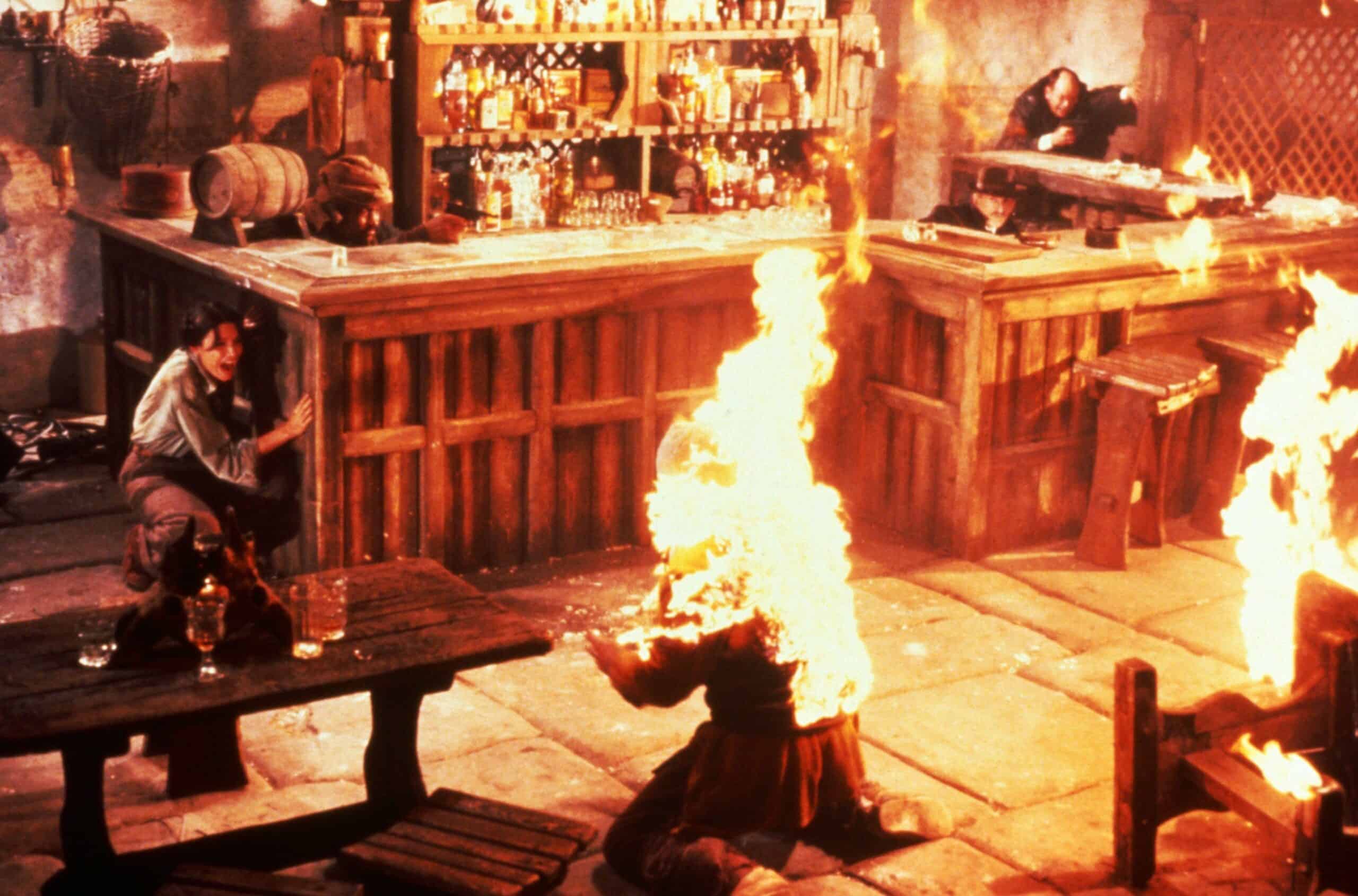 Marion takes cover from the bad guys on fire

This is also a great showcase for Marion as a heroine. Arguably more of a presence in this scene than Jones himself, she subdues one baddie, kills another, manages to grab herself a drink, and is shown to be level headed when grabbing the medallion, wrapping it in a cloth before escaping. The final shot of the sequence is of Marion holding the medallion with the flaming wreckage of her bar in the background, potentially foreshadowing the devastation which will be wreaked on the baddies at the film’s end.

As a film, Raiders is much better than needs to be. Always entertaining, but also beautifully shot and structured. Steven Soderbergh uploaded the entire film in black and white to his website as a deconstruction of how to block a film, and it’s well worth a look (http://extension765.com/soderblogh/18-raiders). It’s a film that is justly celebrated, but the clarity of the visual storytelling is really impressive, and overdue a re-evaluation.

You can listen to our Raiders podcast episode for more in-depth analysis and the stories behind the scenes.