Dirty Harry celebrated its 50th anniversary in 2021. As a companion piece to our podcast episode on the film, Charlie Bleecker is bringing you 20 incredible facts on the iconic movie.

In 1971, Clint Eastwood starred in what would become his longest-running movie series and one of his most iconic roles when he played tough cop Harry CAllahan in Dirty Harry. We’ve revisited the classic movie to bring you behind the scenes stories, interesting facts and more on the making of the film.

1. A different director and star?

Future The Empire Strikes Back director Irvin Kershner was originally signed on as director of the film, with Frank Sinatra in place in the lead role. Sinatra had injured his hand during production of The Manchurian Candidate and, as a result, couldn’t comfortably hold the .44 Magnum pistol. He left production, and Kershner soon followed.

2. Other big stars turned the movie down

Burt Lancaster and Paul Newman were approached but neither liked the right-wing politics of the film. Newman recommended Eastwood because of his right leaning political views. He was reluctant at first but became interested because he felt that the issue of victims’ rights were being ignored in the political arena.

3. Eastwood took the role on the condition that Don Siegel would direct

Siegel and Eastwood had worked on three films in the past, Coogan’s Bluff, Two Mules For Sister Sarah and The Beguiled. Siegel was under contact with Universal at the time and Eastwood paid a visit to the execs at Universal to persuade them to loan Siegel to Warners.

Siegel was sick but it was always in the schedule for Clint to direct this scene because of the tight location. Six nights were allotted for the filming of the scene; Eastwood wrapped it up in one day.

5. The original Scorpio actor died before filming could start

Don Siegel’s original choice for the role of Scorpio was WWII hero turned actor Audie Murphy, he thought Murphy playing against type would shock audiences. But Murphy died in a plane crash before he could accept the role.

Siegel had to set his sights elsewhere and saw Andrew Robinson in a play and was struck by his angelic face; he liked the contrast between his looks and Scorpio’s actions.

7. Andrew Robinson made up his own backstory for Scorpio

Before filming, Robinson created a backstory for the character. In his head, Scorpio had been to Vietnam and seen the true horrors of war. When he returned home, he was the figure of hate that so many returning vets were, and this combined with what he saw in battle, turned him insane.

8. John Milius and Terrence Malick helped with the script

Milus, who was a self-confessed “right-wing extremist”, added the emphasis on guns and Harry’s political views. Malick had the idea of a vigilante killer of criminals, an idea which was scrapped but then adapted into the first sequel, Magnum Force.

9. The famous line was originally different

The script went through a number of re-writes, including being set in New York and Seattle. Originally, the screenplay had Harry pointing the gun at his own head and not at the bank robber on the ground when he does his, “do I feel lucky?” speech.

10. The film was mostly shot where it’s set

The majority of the film was shot on location in and around San Francisco. The only scene that wasn’t, was the bank robbery scene, which was shot on a set in Los Angeles. Clint took advantage of this by displaying a movie marquee on the street, advertising his directorial debut, Play Misty For Me.

11. The story was inspired by a real-life serial killer

The story of Dirty Harry was inspired, in part, by the chilling true crimes of The Zodiac Killer. Based in San Francisco, the Zodiac Killer sent letters to the police, threatening to take out a school bus full of kids. Harry is also partly based on Dave Toschi, the policeman leading the Zodiac case, as depicted by Mark Ruffalo in David Fincher’s Zodiac.

The film opens on a wall commemorating those who have lost their lives in the line of duty. One of the names shown is Eric A Zelms, Zelms was one of the two police officers who saw and potentially spoke to the actual Zodiac killer on the night that cabbie Paul Stine was murdered on the corner of Washington and Cherry, as depicted in the Fincher film. He was subsequentially shot and killed on 1st Jan 1970, around 3 months after the Zodiac incident.

Robinson was a pacifist and greatly objected to the moments where Scorpio smacks the kids around on the bus and racially abuses the guy who beats him up. He also flinched badly every time he fired a gun so Siegel shut down production and sent him to gun training. Despite this, he was so convincing as a deranged killer that he received death threats and had to get an unlisted phone number.

14. Andrew Robinson ad-libbed some of his lines

In the Mount Davidson Cross scene, Andrew Robinson ad-libbed the line, “my, that’s a big one.” When he first said it, all the crew cracked up, rolling around on the floor laughing. But Siegel liked it, so they re-shot it without the guffaws. Robinson also ad-libbed, “hubba, hubba, hubba, pig bastard” when he’s on the phone to Harry.

15. A 49ers football match helped Siegel decide on a location

The Kezar football stadium was chosen as the venue for the scene where Harry tracks Scorpio down. Eastwood and Siegel were at the ground one evening watching the San Francisco 49ers and Siegel thought it would be an eerie setting without any people in the stadium.

Composer Lalo Schifrin wanted to use a female vocal part for the scenes with Scorpio because he felt that, because the character was insane, he heard voices in his head, and the vocal would represent this.

17. Eastwood did some of his own stunt work

The moment where Harry leaps from the bridge onto the moving school bus was done by Clint himself. 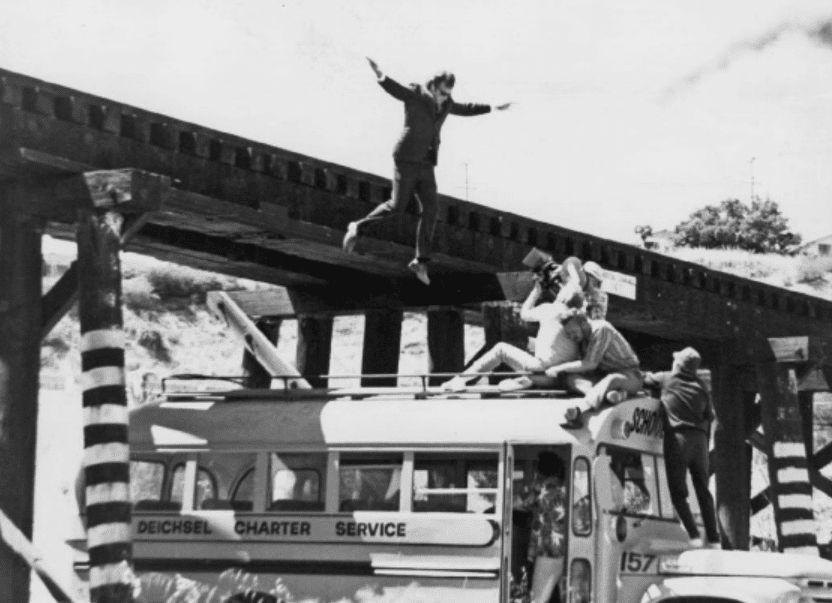 18. Eastwood and Siegel disagreed on the final moments of the film

Siegel wanted Harry to throw his badge into the river, Clint didn’t like it because he felt that it signified that he was quitting the force. Siegel argued that it signified Harry’s frustration of the system that seemed to get in the way of him doing his job. They compromised by agreeing that Harry would go to throw the badge, before thinking twice and putting it back in his pocket. When it came to filming the scene, Clint came round to Siegel’s way of thinking. The scene is a reference to a similar moment in High Noon (1952).

19. The film courted controversy upon release

When Dirty Harry was released, it was greeted with controversy towards its political stance. At the 1972 Academy Awards ceremony, a feminist group protested outside, holding up banners that read “Dirty Harry is a rotten pig”

20. The film was an influence on the cinematic landscape – and the Austrian Oak

Dirty Harry helped shape the way the police were portrayed in the years that followed and its influence can be seen all over the action films of the 70s and 80s. Not only this, but Arnold Schwarzenegger said that Harry was one of his biggest influences and actively sought out wisecracking action roles because of the film.

For more behind the scenes facts and stories, check out our podcast on Dirty Harry.

Connect with All The Right Movies